We're Back A Dinosaur's Story Wiki
Register
Don't have an account?
Sign In
Advertisement
in: Characters, Male Characters, Outdated,
and 6 more

Rex is an orange T-rex and the main character of We're Back! A Dinosaur's Story. He is voiced by actor John Goodman.

Rex is a fairly friendly and highly intelligent dinosaur who spends his free time golfing. Outside of that he loves entertaining children at the Museum Of Natural History in New York City. Rex however wasn't always like this. Prior to being fed Brain Grain cereal Rex was according to him, "stupid and blind." Rex unfortunately is also incredibly trusting to a fault and his loyalty to his friends can be used against him as it was when he ran into Professor Screweyes. Once Rex was force fed Brain Drain he reverted back to his more primal self.

65,000,000 years ago Rex was a real terror chasing a small Thescelosaurus and planning to eat it. Then a UFO hits Prehistoric Rex in the head. Then what comes out of the ufo was a small alien named Vorb. Vorb gives Rex a special cereal called Brain Grain, that's when Rex's life changed forever. Rex's personality and appearance change he also has the ability to talk and act as civilized and smart as a human being. Then Rex meets three dinosaurs: a blue Triceratops named Woog, a green Parasaurolophus named Dweeb, and a purple Pterodactyl named Elsa. Rex and the gang eat hot dogs together.

After that, they meet a wise old man from the future where all the species all the planets learn to get along. He shows the Rex and the dinosaurs his invention the Wish Radio. With it, Captain Neweyes can hear what children are wishing for. Many children from the Middle Future want to see the Dinosaurs so Capt. Neweyes gives them Brian Grain, so Rex, Woog, Dweeb and Elsa can make decisions of their own. Then Capt. Neweyes shows the dinosaurs two people they should know about. One person is named Dr. Julius Bleeb. Capt. Neweyes replies that Dr. Julius knows that the dinosaurs are coming and also her address is The Museum of Natural History. The next person is Capt. Neweyes' brother Pro. Screweyes. Neweyes mentioned that Screweyes is insane causing strife and chaos wherever he goes and tells the dinosaurs to stay away from his dark and evil brother. Then Neweyes takes the dinosaurs to New York City.

Rex and the gang arrive at the Hudson River and meet a boy named Louie after accidentally landing Louie into the water and fishing him out. Then Louie shows the dinosaurs New York City but then Rex drowns in the water! Louie saves Rex with the help of Dweeb, Elsa and Woog. Rex and Louie become friends after that. And then Louie invites Rex and the gang to the circus they all agree to go. And then they leave the harbor and head to the city. But they need to go unseen so Louie flies on Elsa and they go on a high speed flight.

Then Louie notices a girl named Cecilia Nuthatch, a lonely girl with a wealthy family but her mother was very social. And her father is always busy. Then Louie mentions that his mother is always kissing him in public so he tells Cecilia that he is running away to join the circus he convinces Cecilia to go with him she says yes. Next Cecilia meets the dinosaurs and introduces herself Louie asks her, "Are you some debutante?" Cecilia smiles and says, "Why, yes, I am." Then Louie starts to have a crush on Cecilia. Then finally they go to a parade and the dinosaurs act as if they are animatronic. Then Rex begins to sing a song. But then Rex notices a purple Brontosaurus and shakes its "hand" but it was a balloon and fell to the ground. Next a little girl gets near Rex who says hi to her. But then the people find out they were real dinosaurs and panic. Then Louie and Cecilia tell the dinos that they'll meet in Central Park.

But then they find a poster saying Professor Screweyes' Eccentric Circus. Rex claims that Screweyes is the bad guy and that Louie and Cecilia are in danger and it is up to the dinosaurs so save them! Next the police surround the dinos and they flee and landed in Central Park and saw the circus. After that Louie and Cecilia go to the Eccentric Circus and meet Screweyes and a funny clown named Stubbs. Cecilia laughed at Stubbs' joke but then Screweyes asks in a angry tone, "Who laughed?!" Then Screweyes tells the kids if they wanted to sign in they would have to sign in a contract with their own blood.

The dinosaurs then arrive at the circus and tell the kids to stay away from him. And Screweyes shows them his Radio, but Rex tells the kid to go with Rex and the gang. But they signed the contract so they stayed there forever! But Screweyes shows a solution about the kids. Then Screweyes shows dinosaurs Brain Drain and said it will revert them back to there prehistoric selves, but the dinos refused. Next Screweyes hypnotizes the kids and turns them into chimps. Rex tells Screweyes, "Change them back! Or I'll-" but Screweyes asks, "Or you'll what?" and tells the dinosaurs that they are too civilized to threaten anyone. So the dinosaurs only have two decisions. If they agree to take the Brain Drain Screweyes will break the contract and set the kids free. If they said no then Screweyes will take the kids to the Hellzahopin to scare people. All four dinosaurs take the Brain Drain. The kids then change back to normal and they later meet Stubbs the Clown. Stubbs shows the kids his bip or joke they laughed. But Louie wondered what happened to the dinosaurs. Stubbs showed them. The kids were terrified of the dinos' prehistoric selves.

Louie and Cecilia are entered in the circus show. Then Screweyes shows the people the reverted dinosaurs. Screweyes tries to hypnotize the reverted Rex by using his screw eye. But then the reverted Rex was frightened by a flash and grabbed Screweyes and tried to eat him. But then Louie tells reverted Rex that he shouldn't do it and tells him don't be a bully. Then the reverted Rex snapped out of it and became the happy-go-lucky Rex again. The audience cheered Louie and Cecilia changed the dinosaurs back to their civilized selves. Finally, Neweyes' ship freed the dinosaurs. Next, Neweyes takes the dinosaurs and the kids the ship. Screweyes met his demise. Finally, after a long adventure, They finally made it to the Museum and fulfilled the wishes of many children and Louie and Cecilia became a cute couple and reunited with their families. Rex was going to the Culver City, Los Angeles with his friends, the dinosaurs, Jordan the yellow Stegosaurus, mammal-like reptiles, humanosaurs and humans, lived in the Four Points by Sheraton Los Angeles Westside, ride on the circus train and visit the nine-year-old girl, Robyn Starling.

And so, Rex tells Buster to remember his story and never run away from his parents no matter what.

Rex is an orange Tyrannosaurus Rex with a beige Torso and Muzzle, Rex also has Sharp teeth and claws, and a big Snout, and he has a big Dinosaur Tail and big toe nails. 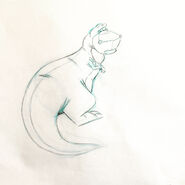 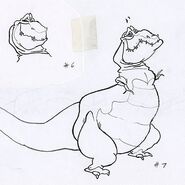